Dr Smith has extensive experience in laparoscopic gallbladder removal (cholecystectomy).  In otherwise healthy patients, this can usually performed as ‘day-case’ surgery without an overnight stay in hospital.

What is the Gallbladder?

The gallbladder is an outpouching of the bile duct that drains bile from the liver to the small intestine.  The function of the gallbladder is to store bile in between meals, and to release it when we eat.

When does the Gallbladder need to be removed?

In some people, gallstones can form in the gallbladder.  Once these form, they will generally continue to cause symptoms until the gallbladder is removed.  Most commonly this is just pain in the upper abdomen after meals – called biliary colic, but occasionally gallstones can cause more serious infections or inflammation of the pancreas gland.

In some people, the gallbladder can cause pain even though gallstones are not present.  If the gallbladder is shown to be non-functional on tests then removal is also usually recommended.

How is the Gallbladder removed?

These days almost all gallbladder removal is undertaken using laparoscopic (keyhole) surgery.  This surgery is conducted through four small incisions under a general anaesthetic.  Most people either go home the same day as surgery or stay one night in hospital.

Gallbladder removal has been performed for over 100 years, and no serious long-term side effects have been found following its removal.  The digestion adapts very rapidly to liver bile constantly flowing in to the intestine and being recycled back to the liver via the bloodstream.  Sometimes people can notice that their bowel movements are slightly looser following gallbladder removal. 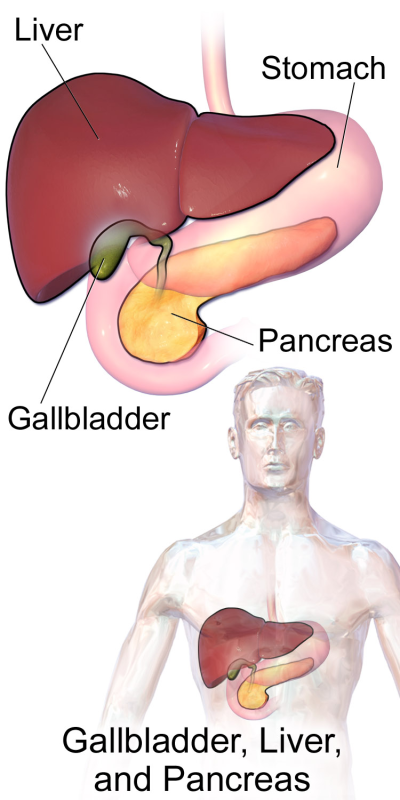 A hernia is a weakness in the muscular wall of the abdomen that allows the internal organs to sit directly beneath the skin.  Hernias usually occur a site of natural weakness such as the navel (umbilicus) or the groin, although they can also occur through scars from previous surgery.

A hiatal hernia is a special type of hernia that occurs where the oesophagus passes through the diaphragm muscle between the chest and abdomen and is discussed further in the gastro-oesophageal reflux section.

What symptoms do hernias cause?

Hernias typically cause a bulge in the groin or abdominal wall.  This bulge usually comes and goes at first, getting larger with coughing or straining and getting smaller on lying down.  At this stage hernias can cause pain but few other symptoms.  If left they usually grow larger, but there is a small chance of more serious complications such a blockage to the bowel or its blood supply.  For this reason, repair of even small hernias with few symptoms is usually recommended.

How are hernias treated?

As hernias are caused by a weakness in the abdominal wall, treatment usually involves surgery to strengthen the area of weakness.  This is achieved by placing a piece of polypropylene mesh in to the abdominal wall, like patching a bicycle tyre.  Most hernias can be repaired using either an open incision or a laparoscopic (keyhole surgery) approach.

What are the advantages of laparoscopic hernia repair?

Laparoscopic or keyhole surgery techniques can be used to repair most types of hernias, but the advantages of this approach are most marked for groin hernias.  For groin hernias there is good evidence that compared to open surgery, a laproscopic repair offers:

Laparoscopic surgery can also repair hernias in both groins at the same time with the same three small cuts, and offers specific advantages for repairing hernias that have come back after an open repair.

What about other types of hernia?

As well as hernias in the groin, hernias can occur at the navel (umbilicus) or through scars from previous surgery (incisional).  Together these types of hernias are often called ‘ventral’ hernias.  Ventral hernias vary a lot in their size, cause and location, and there is no ‘one size fits all’ approach to repairing them.  For very small hernias at low risk of recurring, often one or two stitches through a small incision is all that is needed.  For larger ventral hernias, mesh reinforcement of the abdominal wall usually helps prevent the hernias recurring.  A laparoscopic approach to mesh placement reduces the risk of problems with wound healing and infection at the hernia site.  For very large hernias, particularly those caused by previous open surgery, an open operation that separates the different muscular layers of the abdominal wall while maintaining a healthy blood supply to heal the surgical wound is often the best option.  Dr Smith is experienced in multiple different options for repairing these ‘complex’ ventral hernias, and would be happy to discuss the surgical options with you.

Dr Smith is experienced in Laparoscopic anti-reflux surgery and offers partial or total (Nissen) fundoplication as well as re-do surgery.  These surgeries involve correcting the anatomical problems that pre-dispose people to reflux, as well as strengthening the valve mechanism between the oesophagus and stomach.  Typical hospital stay is 1-day.

What is Gastro-oesophageal reflux disease (GORD)?

Gastro-oesophageal Reflux Disease (also known as GORD or reflux) is a condition where acid and digestive enzymes from the stomach, reflux back in to the oesophagus causing burning and damage. GORD is a common condition, affecting approximately 20% of the population in most developed countries. GORD is considered to be a benign condition, although in a small number of sufferers it may cause severe or disabling symptoms.

What are the symptoms of GORD?

The typical symptoms caused by GORD are heartburn, which is a burning pain behind the breastbone, and reflux of food or acid in to the back of the throat. There are also less common (or atypical) symptoms which include chest pain, cough, asthma, and a hoarse voice. Not everybody with GORD experiences all of these symptoms.

GORD is a common condition, and in general is caused by a failure of the normal valve mechanism at the top of the stomach that allows downwards passage of food but prevents upwards passage of acid and digestive enzymes. The medical name for this valve is the lower oesophageal sphincter or LOS. GORD is commonly found in association with a hiatal hernia, which is where part of the stomach sits in the chest, above the diaphragm. Although hiatal hernias are also common, and not all people with hiatal hernias experience GORD, this association is probably due to the lower pressures in the chest interfering with the action of the lower oesophageal sphincter.

How is GORD diagnosed?

Most people with gastro-oesophageal reflux disease have mild and infrequent symptoms. For these people, especially if they have ‘typical’ symptoms, the diagnosis is usually made on the basis of symptoms alone. For those with unusual symptoms, symptoms that fail to respond to treatment, or symptoms that recur after stopping treatment, an endoscopy is recommended. Endoscopy is examination of the oesophagus, stomach and duodenum using a flexible ‘endoscope’. It is performed as a day procedure, either with local anaesthetic to the throat or intravenous sedation.

Symptoms of GORD may be similar to other serious diseases and urgent endoscopy is always recommended in the following circumstances:

Sometimes an endoscopy is normal, even in the presence of severe GORD symptoms. This may occur if a patient is taking acid suppressing medication before the endoscopy, or if the reflux is predominantly digestive enzymes rather than stomach acid. In this setting further investigation with pH testing, barium swallow or oesophageal manometry may be advised. These tests use fine catheters or X-ray contrast to assess the function of the oesophagus.

How is GORD treated?

GORD is usually treated by a combination of lifestyle changes and medications. For a small number of people with severe GORD, surgery may be recommended.

Many people are able to identify certain foods that provoke their reflux symptoms. These include spicy foods, coffee and alcohol. Avoiding these trigger foods may be all that is required to manage symptoms of mild GORD. Other helpful changes are avoiding eating for four hours before going to bed, and maintaining a healthy body weight.

A small number of patients with GORD eventually undergo surgery to treat this. The most common reasons that people undergo surgery are if medications are not effective in controlling their symptoms, or if they do not wish to take ongoing medications. There is also evidence that even in people with well controlled symptoms on medications, quality of life improves after surgery.

Laparoscopic anti-reflux surgery is performed under a general anaesthetic, and usually people only stay in hospital one night. After surgery it is necessary to have only a liquid diet for three days, and then puree diet only for two weeks after that. It is also necessary to avoid lifting objects heavier than 10kg, and avoid vomiting for at least four weeks.

What are the risks of surgery?

Anti-reflux surgery, performed by an experienced surgeon, is very safe. The risks of serious complications is very low (less than 1 in 100), but includes unrecognised damage to the oesophagus, stomach or spleen. As with any laparoscopic surgery, if the surgery cannot be completed safely laparoscopically, an open operation may be necessary. This is very uncommon and again would be less than one in 100.

In the long term most patients are very happy with the outcome of their surgery, with very good control of reflux symptoms. A small number of patients will develop recurrent reflux, requiring treatment with medications. The tightening of the lower oesophageal sphincter may also cause new symptoms in some patients. These include difficulty swallowing solid foods (especially bread or meat), bloating, inability to belch or vomit, and passing increased wind. Rarely patients will need further surgery in the long term because of recurrent reflux or swallowing difficulties.

What is the difference between a total or partial fundoplication?

Total and partial fundoplication differ around how much of the stomach is wrapped around the oesophagus, which in turn determines how much additional pressure is applied to the lower oesophageal sphincter. It is intuitive to expect, the tighter the lower oesophageal sphincter, the better the control of reflux, but the greater the problems with difficulty swallowing and gas bloat. In fact, the differences in long term outcomes between the two types of fundoplication are very little.

At Aspiring Bariatrics, Laparoscopy and Endoscopy we are happy to offer patients the choice of either partial or total fundoplication. It is important to remember that both operations offer extremely good control of GORD symptoms in the long term. If the chance of having swallowing difficulties is of major concern, we recommend you consider a partial fundoplication, but remember that even with total fundoplication these difficulties tend to decrease with time. Please discuss this further with your surgeon if you have any further questions about this, or any other aspect of laparoscopic fundoplication for gastro-oesophageal reflux disease.

Dr Smith is an accomplished endoscopist with certification by the New Zealand Conjoint Committee for Recognition of Training in Gastrointestinal Endoscopy.  He offers diagnostic and therapeutic upper GI endoscopy and colonoscopy.

In addition to the services above, Dr Smith also specialises in evaluation of other benign and malignant conditions affecting the oesophagus and stomach.